What is Earth Day

Earth Day was envisioned in 1969 by Gaylord Nelson, a U.S. Senator from Wisconsin and champion for the environment. Having just toured the devastated Santa Barbara coastline after a major oil spill, Nelson was inspired by recent teach-ins being held in protest of the Vietnam war.

“It suddenly occurred to me,” he said in a speech years later, “Why not have a nationwide teach-in on the environment? In a speech at Seattle in September, I formally announced that there would be a national environmental teach-in sometime in the spring of 1970.” 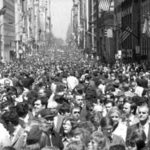 The Earth Day concept built momentum over the next few months, garnering nationwide press coverage and grassroots support. Gaylord was stunned when 20 million people took part on April 22, 1970. American Heritage magazine called Earth Day “one of the most remarkable happenings in the history of democracy.”

The first Earth Day marked the beginning of a new era in environmental politics, an era that saw the passage of the Clean Water Act, the Clean Air Act, and the Endangered Species Act. The success of Earth Day fulfilled Senator Nelson’s goal of “a nationwide demonstration of concern for the environment so large that it would shake the political establishment out of its lethargy and, finally, force this issue permanently onto the national political agenda.”